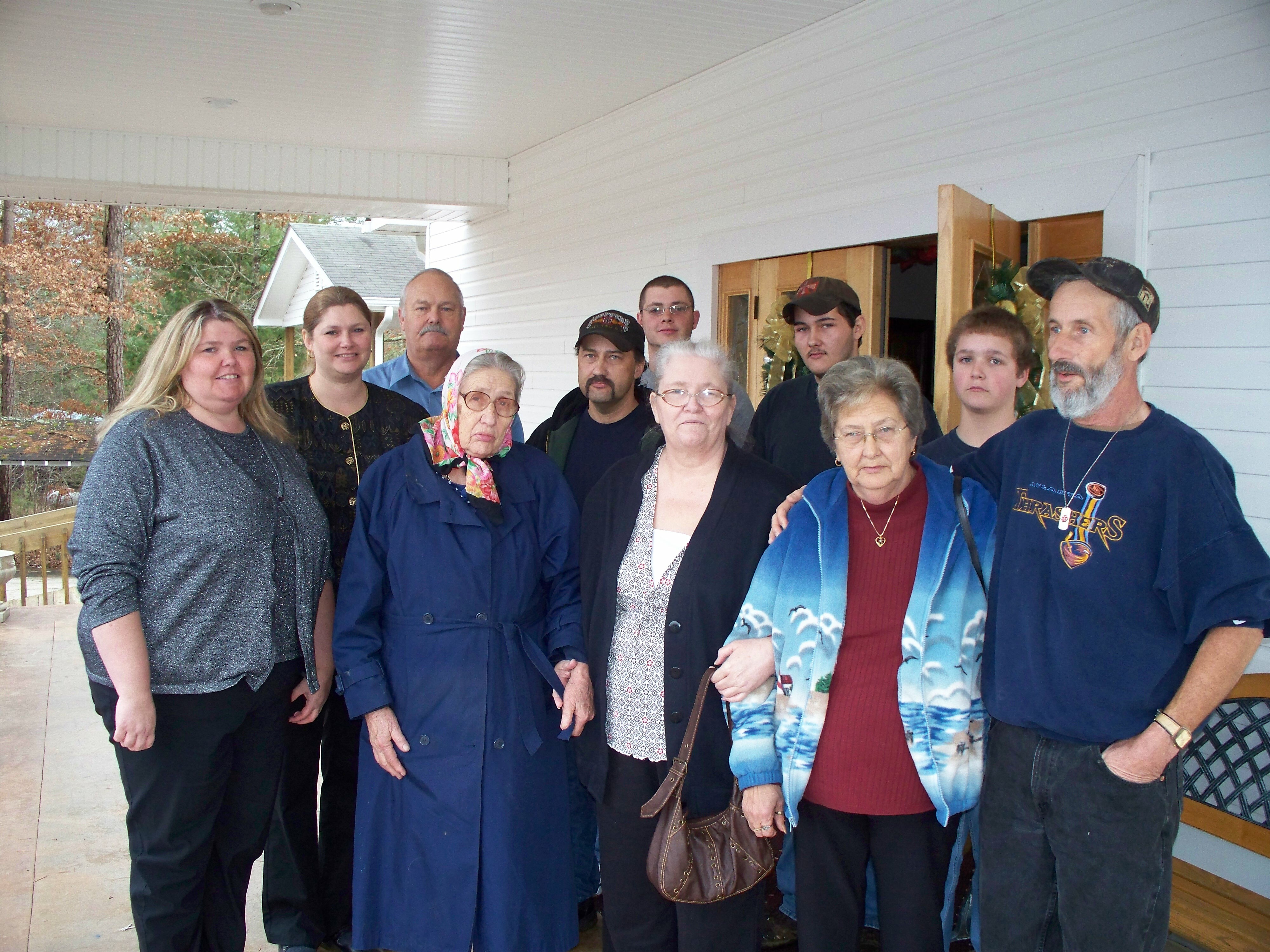 This picture was taken at the funeral of Lewis’s and Susie’s youngest son, Roger Dean Hanna.
These movies were lost for over 25 years, but I found them stashed away when I was cleaning out my closets to sell my house.  Many were lost, but a few were saved and I have done my best to encode them digitally so they can be posted here for all to see.

These old films were not taken with good equipment at the time because, frankly, I could not afford a good camera.  The later ones were filmed with a better camera and are of better quality.  The film is jumpy and blurry because modern equipment runs at a different speed than the old projectors and  cameras.  It cannot be corrected any better than this.  The original film still shows very well on a projector screen and looks as good as modern movies do.  I will treasure it because it cannot ever be replaced.  I wish the other dozen or so films were still around, but they disappeared almost 40 years ago.

My biggest regret was not thinking ahead.  I wanted to create memories of the places we visited, but did not realize the people in the movies were the important part.  I do not appear with my family anywhere, because I did the filming.  If I had to do it over, the movies would be full of us doing things on these trips.

All of that said, here are some wonderful memories of when my girls were little, and times were good.  Cindy was just around 5 or 6 years old at the time and Sara was only a couple years older.

A special treat is in store for my sister Susie and her husband Lewis.  She can now see her older boys again, if only for a second or two.  James was too shy for the camera – as was Lewis.  However, Roger was a film star and loved the attention.  Lewis gets a  couple of cameo appearances, even though he tried to hide.  James appears at the end of the film riding into the sunset, as was appropriate.  I just did not know it at the time.

I got the camera when we lived in Brookhaven, a part of Atlanta. I experimented with it by taking pictures of my vehicles and also of Cindy and Pete the cat. Shoe Box the van was being converted from a simple work van to something to take us across the United States and back. In this video, the chrome bumpers and other things were not installed yet, but the inside with the bar, sink, refrigerator, television, and other parts was complete. I did all of the work by myself.

This is the inside of Shoe Box. I did not have automatic focus on the old camera, so it did not come out very well. Plus, the old film has turned red over the years and cannot be repaired. But, I wanted people to see the little van that took us several thousand miles around the country, including to California and across the Great Plains and the Great Lakes areas. Most of our travels were on two lane roads through the deserts and mountains, since interstates were not built there yet.

This cat was given to Cindy as a kitten. She named him Pete and he was devoted to her. Later we had another Pete who I loved just as much. They looked much alike, but I never named either of them.

This one was taken from the film I shot at Yellowstone National Park.  The camera and the operator were not very good, but somehow the film survived to let you see Old Faithful geyser going off twice and the Lower Yellowstone Falls as the river tumbles down the mountain.

On our way home we stopped at Hawk’s Nest State Park and took some foggy pictures. You would not think it is the same place today with all of the commercialization.

Then we went to Lewis and Susie Hanna’s house for a visit. We took some videos of the families playing together. Sadly, only a little of them remain today. At least Roger is in fine form, but James was too shy to be in front of a movie camera, as was Lewis. A strange thing happened just as I was filming James and his bicycle. The camera filmed just fine, but when I got the film developed, everything after the sunset shot was totally blank. Half the reel was simply clear film and not movie film.

We bought our first house in 1978 and moved to Chamblee Ga. We lived there for a couple of years before I got a job in South Carolina and had to sell the house. I really loved the place.

A trip to Opryland came about that year, and here is a small part of the film I made there. The kids seemed to have fun.

Next, we lived in Greenville, South Carolina from 1980 until late 1981. The vehicles look bad in the video, but the Bushwacker truck was brand new and looked like it in real life. It, like the Mustang and Formula was a limited edition that I have never seen again. Like a fool, I bought vehicles that would one day become collector’s items and then had to sell them when times got tight, or I saw something flashier that caught my eye.

I then moved back to Georgia, and the next home we bought was in Talking Rock, Georgia. I promised Sara a Mustang for her 16th birthday, but part of the deal was that she had to help me build it. Unfortunately for her and the car, it was demolished only a few months after we completed it. I don’t have any pictures of the completed car, but here is what it looked like during part of the restoration. I drove it there and then we started tearing it apart.

Also, Sara’s first husband Kim turns up looking at my old Jeep. Later, they would get married and find Alina hiding somewhere.